Back when the birds spoke Gaelic

Species: A tawny owl (Strix aluco) and magpie (Pica pica) have a battle of wits and it gets UGLY. An ambiguous grey bird is the judge.

Date: Modern! First published 1798, and written a few years before.

Highlights: Once upon a time, long ago, birds could speak Gaelic. Here’s the most famous example.

In British literature scholars occasionally find the strong belief that animals and especially birds used to be able to speak. We’ve dealt with a few examples before, but you don’t have to even go medieval to find a good source of anthropomorphic talking animals.

You may feel like you are medieval though. Sorry about that

But the Beast Literature tradition did not invent the concept of talking animals. There was a native tradition in Gaelic and Welsh literature (e.g. ‘Nauigatio Brendani’, ‘Culhwch ac Olwen’) which may have originally been derived from the biblical stories of the Garden of Eden (Genesis 3) and Baalam’s Donkey (Numbers 22). (Harris-Logan, 2007: 88-91).

Actually, the idea of animals learning to talk remains common in Scottish Gaelic folklore to this day. There is a literary saying (seanfhacal) in modern Gaelic. ‘Nuair a bha Ghaidhlig aig na h-eoin ‘s ann a bha linn an aigh’ (Back when birds spoke Gaelic…. that was the age of joy).

THE COLLOQUY OF THE BIRDS

The most famous example of speaking animals from Scotland is probably a piece of poetry written by Eoghan MacLachlainn (Ewen MacLachlan) called ‘Dàn mu Chonaltradh’ (English title: The Colloquy of the Birds). It was first published in 1798, but is set in the distant age of joy. The translation I give is from Forbes (1905) and is tentative and literary rather than exact.

When MacLachlainn wrote this poem (c.1795) he was still a young man, working as a tutor at Clunes in Lochaber, south-west Scotland, saving money and hoping to go to university (Mackenzie, 1841:321-3). Perhaps the intended theme is one of hope – the world was once a magical place. Harris-Logan (2007:111) has pointed out that Gaelic poetry which represents birds talking is often written for escapist reasons or out of an aspiration for otherness.

But the theme does not have to be decided by the subject matter. In this case the poetry is not solely influenced by the Gaelic tradition. Given the biblical quote at the end, perhaps we should interpret the poem after the fashion of a fable. In this case the moral would glorify the owl’s passive and quiet role – its better to be quiet and thoughtful than loud and brash.

The introduction of the poem situates the poem. Birds generally are associated with woodland habitat (coille) and do not just speak but understand verse (dàn), and talk intelligently about all sorts of subjects (ioma ponc). They are not just speaking but wise, if we can trust what bards tell us (fior am bard).

The characters are also introduced. The magpie is introduced as if it was an action hero from the Fenian cycle. Its lines often start with actions. ‘Thainig iaid… shuidh i… Dh’eirich a phiaid gu grad’ (A magpie came… it sat… the magpie jumped up). At the same time its actions are hasty and foolish. It perches temporarily on a weak branch (a dying alder (alnus sp.) which may break at any time, stamps its foot and jumps around. The owl is introduced more placidly. It was there before the magpie arrived and very few actions are assigned to it.

Of course, the idea that owls are wise and quiet and magpies are loud and brash is not original to the poem, and was probably a popular cultural conceptualisation even in the eighteenth century. We have previously seen magpies being berated for their loquaciousness as early as the fourteenth century. A similar folkloric poem praising the owl’s quiet wisdom is preserved as Roud 7734 although only from the nineteenth century.

The second part of the poem is a traditional Scottish flyting battle of wits, where each participant heaps scorn upon another to win points and argue their case.

First the magpie speaks. It claims the owl is as dull as the scenery around it, and takes its silence as an indication of brainlessness.

The owl’s answer is very interesting. First, it claims the magpie talks too much and makes too many mistakes so will be seen as foolish.

More interestingly it also compares its own call ‘pu-hu-hu-u’ to the magpie’s ‘glige-ghlaige’. Fobes (1905) makes the owl’s call into the sound of crying, and leaves the magpie’s call untranslated suggesting just a nonsensical glug-glug sound. There is more to it than that however. This is actually an example of mimesis (mimicry). Gaelic poets of this period frequently represented bird calls in poetry, and expected readers to be able to mimic them.

The ‘pu-hu-hu-u’ is supposed to represent the call of an owl. It is the first sound the owl makes and assists the audience’s realisation that a new character is speaking. From this we can actually identify the owl to species level as a tawny (Strix aluco) (Harris-Logan, 2015 has pointed out to me the bird is also actually called riabhach (brindled), an adjective often applied to the tawny owl).  The magpie’s call is even more interesting in some ways because it is being used in mockery. The very sound the magpie makes is being held against it.

The parts in square bracket were not translated by Forbes and are based on my own translation.

There are six clues for identification here:

Considering all these factors I would suggest the most likely candidate for the ‘glas eun’ is the meadow pipit. It does not entirely meet all the criteria however, so I am not altogether happy with the identification. Harris-Logan (2015) has suggested to me that the reference was probably kept deliberately vague. 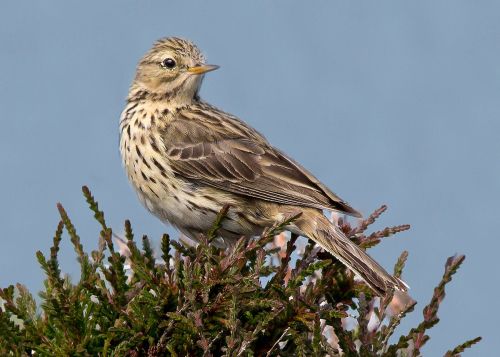 The bird starts by paraphrasing Ecclesiastes 3. It is Christian and knows its scripture. Clearly therefore it is well qualified for ‘gach beairt a rèiteach’ (to settle each case). This bird gives its ‘briathran’ (courtroom judgement) on the flyting in the owl’s favour.

Even clever people can appear foolish if they talk too much, whereas foolish people being quiet can be mistaken as wise. The owl’s approach to life is therefore correct. According to the meadow pipit, it’s better to be quiet for fear of being seen as silly.

BUT in order to get this judgement, the owl had to make a bitter, personal and therefore especially fun attack against the magpie. This included even mocking the way the magpie spoke. The poem does not set the owl up as a model of behaviour, but as one of two comical opponents. I would suggest the poem was not written (primarily) to persuade its readers to copy the owl, but to entertain them.

The characters assigned to the owl and magpie here are typical and have a long tradition, but it is worth emphasising that they are not natural but entirely culturally determined. We previously examined a Welsh text from 450 years earlier where (tawny?) owls were seen as so loud that the poet threatened to burn their woods down.

On the other hand, although the depiction is not especially naturalistic and the birds can speak, the text is still important for what it says about the species in human culture. The way that the poet could represent their cries in onomatopoeia is impressive but typical of Gaelic poetry from the period (see: Harris-Logan, 2007). Readers were so familiar with both of these birds their cries could be represented in poetry.

Overall then, ‘Dàn mu Chonaltradh’ (‘The Colloquy of the Birds’) represents a point when two birds had such considerable profiles in Britain’s collective memory that they could confront each other and argue their respective lifestyles. In some ways that the owl won is no surprise. It has always been higher in the hierarchy of birds than the magpie.

Once upon a time birds could talk. It wasn’t pretty. Tawny owl in hollow tree photographed by echoe69 and licensed under CC-BY-ND-2.0.

Have you ever heard of a meadow pipit holding court? Do you have any opinion on the theme of this text? Contact me on Twitter @NaturalHistoryL, or follow me on Facebook to get the highlights without any of the boring bits.

Special thanks are due to Stuart Harris-Logan for his assistance with this blog post. All mistakes are my own.

4 responses to “Back when the birds spoke Gaelic”